Released originally in 2004 and instantly becoming a n. 1 club hit worldwide, To The Club was newly released globally in 2016 by Armin Van Buuren‘s record label Armada Music reaching new levels of popularity. It was played at Tomorrowland, Ultra, EDC and all the major dance music festivals by artists such as David Guetta, R3HAB, Axwell^Ingrosso, Dimitri Vegas & Like Mike, Fedde Le Grand, Fatboy Slim and many more.

In March 2022 Spankox teamed up with Brazilian superstar DJs Cat Dealers and FTAMPA and together they released on Armada Music the track Club Addict“, featuring the iconic To The Club vocals. Club Addict has already been playlisted by some of the world’s biggest DJs and is set to become one of the hottest of the year.

With JXL and Paul Oakenfold, Spankox is one of the three official Elvis Presley’s remixers and the only one that was allowed by The Elvis Presley Estate to make a whole album of Elvis remixes, Elvis vs. Spankox “Re:Versions” (Sony Music). In 2017 he remixed officially the famous song Pretty Woman by the legendary Roy Orbison and the single Periscope (feat. Skylar Grey) by the American rock band Papa Roach.Spankox is also the composer of the original soundtrack, the producer and one of the actors of the cult movie Miami II Ibiza – An Electronic Dance Music Journey, starring Carl Cox, Pete Tong, Bob Sinclar, Junior Jack, Tiësto and many other world famous DJs. He’s also the owner of the record label Everness.

Spankox loves to perform his music around the world and you can often spot him behind the decks in some of the best international clubs and festivals. His live DJ sets are fantastic house music journeys that always set the dancefloor on fire.

Spankox recently started his official “To The Club” YouTube channel featuring experiences in some of the best clubs around the world. 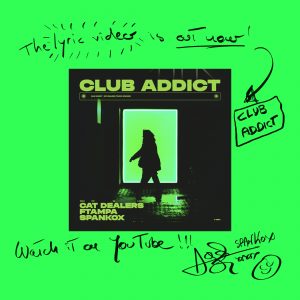